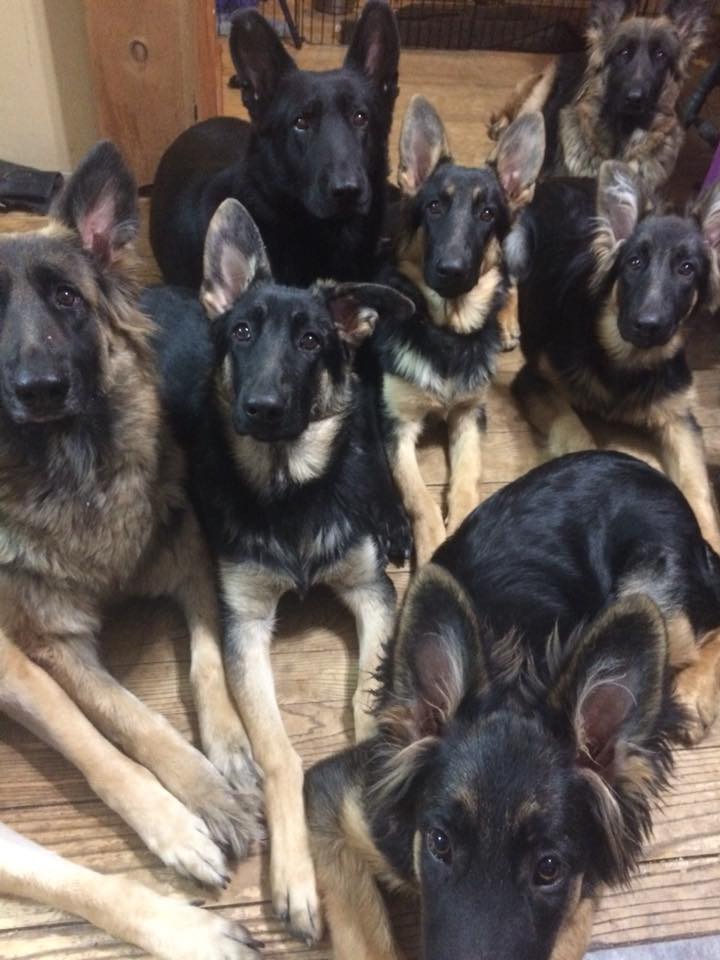 One of the most misunderstood aspects of the dog world is understanding the alpha dog roll and ‘showing a dog who is boss.’ In fact, in our pack (9 dogs are living loose in my house at the moment including 2 males) I find that being calm and showing lots of affection lowers the stress level. When the stress level is lower, there is less resource guarding, arguing over toys, squabbles and reactivity.

In fact, just today a stranger brought 8 boxes of raw dog food and put them on the front steps while I was doing an obedience lesson with four puppies. I never even knew someone was at the house until my husband started carrying boxes into the house. When John is home the dogs are not on alert. However, John went on holiday and the dogs took turns staying awake. I know because they kept waking me up pacing around the house at night.

I do not do alpha rolls. I do not ‘show dogs who is boss.’ The one thing I do is create ‘set ups’ and use them to teach the dogs how I want them to behave. But I also have times when I am alpha. Am I always alpha? No. When I let puppies outside in the large run I let out Carlos and Ro. Carlos ‘fathers’ the puppies. Ro sits watch. I stay in the house. When they return in the house, then I am alpha.

When a leash is on a dog – I am alpha. I wrote a few articles on alpha rolls in the ‘family’ pack that will help you bring order and peace to your home environment.

A Little History on the Alpha Theory

The problem has grown out of misunderstandings. People base their perception of the alpha roll on their own understanding of social hierarchy. In fact, your idea of an alpha is heavily influenced by your father. For better, or worse, you use the behaviors he taught you to determine how to treat your dog. This could stem from using a ‘firm hand’ because you saw this as strength, to being very permissive because you do not want to cause/relive the pain of your past.

Second, because in the past researchers studied wolves and applied what they learned to the dog pack. We can trace this back to B.F.Skinner if we want to study academically. But in truth, most people trace their idea of dominance and alpha behavior to Konrad Lorenz’s book, “King Solomon’s Ring,” (1949), and a little more recently William R. Koehler’s book, “The Koehler Method of Dog Training” (1962).

What the author bios do not tell you is that these methods were used by organizations which bought many puppies, and culled those that didn’t make the grade. The practice of culling is no longer used. It was acceptable to buy 10 puppies and cull 8 in the days of Lorenz and Koehler’s day.

Today we use training methods that are designed to save as many dogs as possible, not just the ones with the temperament for a particular job.

Our society also influences what we see as acceptable behavior.  Lorenz lived in Austria, in war times.  Koeler lived in America and trained at the War Dog Training Academy, California just after the Second World War.

These are the books the average ‘self taught’ dog trainer used to shape their ideals of how humans should ‘build’ their pack, and how they should ‘force’ dogs to fit into their pack. These are the books generations of pet owners purchased to help them solve behavior issues. The problem is that they caused more issues than they solved.

40 years ago researchers believed wolves fought for dominance. They believed the alpha had all the privileges and ruled the pack by dominance. Today we realize that parents are the alphas, and the young dogs are subordinate, in the same way parents make the decisions in their homes. (PsychologyToday.com Canine Dominance: Is the Concept of the Alpha Dog Valid?)

The alpha watches out for intruders and tells the pack to fight or run. But, We walk dogs to relax. The dog senses that we are not attentive, via our body language and scent. So, if we are not alpha, in charge, and watching for danger then our dog will fill the void. The dog will take over the alpha roll.

We are walking and mentally disengage with our dog, but are surprised when our dog disengages with us. If you are not ‘actively’ walking your dog then your dog will not ‘actively’ follow you. This doesn’t mean you need to over power your dog. It means you need to be followed. When you walk, your dog walks. When you stop, your dog stops. You watch and when you see a strange dog – move out of the way. Do not walk towards it. If the dog poses a threat then turn around. This is common sense – at least to the dog.

When we are not filling the alpha roll our dog must look for danger, keep potential danger away, and keep the pack safe. This is where we see lunging, barking, and pulling behavior.

If you start giving your dog signs that you are alpha then your dog will start relax and follow you.

How Does This Make Dogs Reactive?

When we take this fact, and research the types of people who end up with a reactive dog, we see a correlation between pet owners who call their dogs ‘fur babies’ and who want puppies to ‘have a childhood’ or who are negligent, and the number of reactive cases. This is because when the dog is on a walk, or when someone walks by the house, the dog feels that they must step up and fill the ‘alpha void.’

The Secret to Being Alpha

Now here is what most people do not understand – trainers and even behavior consultants get it wrong. The alpha doesn’t force the pack to obey. Let’ that sink in.

This explains why corrections rarely work. We punish too long, and do not forgive fully.

Second, the alpha feeds the pack. That is where the clicker revolution ‘got it right.’ As long as you are feeding the dog for obeying (following) then you are meeting the dog’s needs at a primal level. In short – you are speaking dog. You are filling the ‘alpha void’.

The Alpha make things safe so the pack can play. If you want to be the alpha then you need to take the roll – as the dog understands it. I have seen this in reality at a local agility club. I have sat there for an hour with over 2 dozen dogs loose, running, and there is never a single reaction. No fights. All dogs are engaged. It is beautiful to watch.

After learning from this agility instructor, I came to realize that play with a dog is not optional, it is a fundamental part of a dog’s mental health. ’ It is fundamental if you wish to be seen as the alpha dog. This is confirmed by Dr Katrina’s Ward’s Hierarchy of Dog Needs.

You do not define how the alpha dog position plays out in your home. Your dog’s social intelligence does. It is a simple dance, either You fill the roll, or you create conflict with your dog.